We have already seen how to use Active Record (AR) to select data from a single database table. In this section, we describe how to use AR to join several related database tables and bring back the joint data set.

In order to use relational AR, it is required that primary-foreign key relationships are well defined between tables that need to be joined. AR relies on the metadata about these relationships to determine how to join the tables.

Note: Starting from version 1.0.1, you can use relational AR even if you do not define any foreign key constraints in your database.

For simplicity, we will use the database schema shown in the following entity-relationship (ER) diagram to illustrate examples in this section. 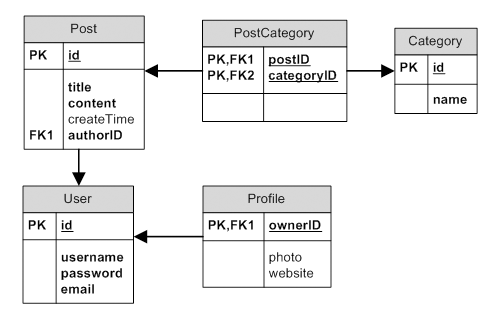 SQLite does not support foreign key constraints, but you can still declare the constraints when creating tables. AR can exploit these declarations to correctly support relational queries.

MySQL supports foreign key constraints with InnoDB engine, but not with MyISAM. It is thus recommended that you use InnoDB for your MySQL database. When using MyISAM, you may exploit the following trick so that you can perform relational queries using AR:

In the above, we use COMMENT keyword to describe the foreign key constraint which can be read by AR to recognize the described relationship.

Before we use AR to perform relational query, we need to let AR know how one AR class is related with another.

Declaring relationship in AR involves overriding the relations() method of CActiveRecord. The method returns an array of relationship configurations. Each array element represents a single relationship with the following format:

The following code shows how we declare the relationships for the User and Post classes.

The declaration of relationships in an AR class implicitly adds a property to the class for each relationship. After a relational query is performed, the corresponding property will be populated with the related AR instance(s). For example, if $author represents a User AR instance, we can use $author->posts to access its related Post instances.

Info: If there is no related instance for a relationship, the corresponding property could be either null or an empty array. For BELONGS_TO and HAS_ONE relationships, the result is null; for HAS_MANY and MANY_MANY, it is an empty array. Note that the HAS_MANY and MANY_MANY relationships return arrays of objects, you will need to loop through the results before trying to access any properties. Otherwise, you may receive "Trying to get property of non-object" errors.

The lazy loading approach is very convenient to use, but it is not efficient in some scenarios. For example, if we want to access the author information for N posts, using the lazy approach would involve executing N join queries. We should resort to the so-called eager loading approach under this circumstance.

The eager loading approach retrieves the related AR instances together with the main AR instance(s). This is accomplished by using the with() method together with one of the find or findAll methods in AR. For example,

The above code will return an array of Post instances. Unlike the lazy approach, the author property in each Post instance is already populated with the related User instance before we access the property. Instead of executing a join query for each post, the eager loading approach brings back all posts together with their authors in a single join query!

We can specify multiple relationship names in the with() method and the eager loading approach will bring them back all in one shot. For example, the following code will bring back posts together with their authors and categories:

The above example will bring back all posts together with their author and categories. It will also bring back each author's profile and posts.

Note: The usage of the with() method has been changed since version 1.0.2. Please read the corresponding API documentation carefully.

The AR implementation in Yii is very efficient. When eager loading a hierarchy of related objects involving N HAS_MANY or MANY_MANY relationships, it will take N+1 SQL queries to obtain the needed results. This means it needs to execute 3 SQL queries in the last example because of the posts and categories properties. Other frameworks take a more radical approach by using only one SQL query. At first look, the radical approach seems more efficient because fewer queries are being parsed and executed by DBMS. It is in fact impractical in reality for two reasons. First, there are many repetitive data columns in the result which takes extra time to transmit and process. Second, the number of rows in the result set grows exponentially with the number of tables involved, which makes it simply unmanageable as more relationships are involved.

Since version 1.0.2, you can also enforce the relational query to be done with only one SQL query. Simply append a together() call after with(). For example,

We mentioned that additional options can be specified in relationship declaration. These options, specified as name-value pairs, are used to customize the relational query. They are summarized as below.

In addition, the following options are available for certain relationships during lazy loading:

Below we modify the posts relationship declaration in the User by including some of the above options:

Now if we access $author->posts, we would obtain the author's posts sorted according to their creation time in descending order. Each post instance also has its categories loaded.

Info: When a column name appears in two or more tables being joined together, it needs to be disambiguated. This is done by prefixing the column name with its table name. For example, id becomes Team.id. In AR relational queries, however, we do not have this freedom because the SQL statements are automatically generated by AR which systematically gives each table an alias. Therefore, in order to avoid column name conflict, we use a placeholder to indicate the existence of a column which needs to be disambiguated. AR will replace the placeholder with a suitable table alias and properly disambiguate the column.

Starting from version 1.0.2, we can use dynamic relational query options in both with() and the with option. The dynamic options will overwrite existing options as specified in the relations() method. For example, with the above User model, if we want to use eager loading approach to bring back posts belonging to an author in ascending order (the order option in the relation specification is descending order), we can do the following:

Starting from version 1.0.5, dynamic query options can also be used when using the lazy loading approach to perform relational query. To do so, we should call a method whose name is the same as the relation name and pass the dynamic query options as the method parameter. For example, the following code returns a user's posts whose status is 1:

Note: Statistical query has been supported since version 1.0.4.

Besides the relational query described above, Yii also supports the so-called statistical query (or aggregational query). It refers to retrieving the aggregational information about the related objects, such as the number of comments for each post, the average rating for each product, etc. Statistical query can only be performed for objects related in HAS_MANY (e.g. a post has many comments) or MANY_MANY (e.g. a post belongs to many categories and a category has many posts).

In the above, we declare two statistical queries: commentCount calculates the number of comments belonging to a post, and categoryCount calculates the number of categories that a post belongs to. Note that the relationship between Post and Comment is HAS_MANY, while the relationship between Post and Category is MANY_MANY (with the joining table PostCategory). As we can see, the declaration is very similar to those relations we described in earlier subsections. The only difference is that the relation type is STAT here.

With the above declaration, we can retrieve the number of comments for a post using the expression $post->commentCount. When we access this property for the first time, a SQL statement will be executed implicitly to retrieve the corresponding result. As we already know, this is the so-called lazy loading approach. We can also use the eager loading approach if we need to determine the comment count for multiple posts:

The above statement will execute three SQLs to bring back all posts together with their comment counts and category counts. Using the lazy loading approach, we would end up with 2*N+1 SQL queries if there are N posts.

By default, a statistical query will calculate the COUNT expression (and thus the comment count and category count in the above example). We can customize it by specifying additional options when we declare it in relations(). The available options are summarized as below.

Note: The support for named scopes has been available since version 1.0.5.

The following code shows how to apply named scopes to the main model.

This is very similar to non-relational queries. The only difference is that we have the with() call after the named-scope chain. This query would bring back recently published posts together with their comments.

And the following code shows how to apply named scopes to the related models.

The above query will bring back all posts together with their approved comments. Note that comments refers to the relation name, while recently and approved refer to two named scopes declared in the Comment model class. The relation name and the named scopes should be separated by colons.

Named scopes can also be specified in the with option of the relational rules declared in CActiveRecord::relations(). In the following example, if we access $user->posts, it would bring back all approved comments of the posts.

Note: Named scopes applied to related models must be specified in CActiveRecord::scopes. As a result, they cannot be parameterized.